Minecraft's rare Brown Mooshroom Cow: All you need to know

Minecraft's Mooshroom Cows are usually considered a hassle to collect since they are scarce and only provide the player with mushroom stew.

Considering how difficult these cows are to obtain, the reward players get from actually finding some and transporting them—sometimes over thousands upon thousands of blocks—isn't always worth the effort.

Mushroom stew isn't an efficient food source, as it doesn't stack, and it compares to eating more accessible meats which give more saturation anyway.

But all of this changes when players see the brown Mooshroom. Its adorable appearance is a major selling point.

How rare is the brown mooshroom, and how can players get one?

Minecraft's brown Mooshroom cow is so rare that many veteran players don't even know. About its existence.

This adorable creature is so rare that it has a 0.09765625% (1/1024) chance of spawning from breeding two Red Mooshroom Cows. They don't spawn without player interverence in any other way.

There is only one other way for Minecraft players to obtain a brown Mooshroom. Players must either have a lot of luck or be extremely late. This is because Red Mooshroom Cows can actually be converted into brown cows on thundering days in Minecraft.

Red mooshrooms struck by lightning, either naturally or through the use of a trident enchanted with channeling, turn into a brown Mooshroom.

Why is the brown Mooshroom so desirable?

Brown Mooshrooms are desirable in Minecraft because they don't only produce mushroom stew. Instead, when fed any flower and milked, they also produce suspicious stew—a food type that can provide the player with many different potion effects while filling their hunger bar.

The potion effect given to the player depends on the type of flower they feed the cow. These stews are considered some of the most saturating and lifesaving food types in the game, alongside golden apples and enchanted golden apples. Such foods can give the player amazing effects like regeneration, fire resistance, saturation, and many more.

Players must be careful since feeding these mobs the wrong flower and drinking the incorrect type of suspicious stew can poison the player by blinding them and even gives the Wither Effect.

The image above shows each of the flowers in the game and the different effects they give off.

How long has the brown Mooshroom been in Minecraft?

The Brown Mooshroom was added in a patch update during Update 1.14. Much after the regular, Red Mooshroom Cow was added to the game.

It was an easy update to miss if players weren't actively following every snapshot release. Many players who joined Minecraft during or after late 2019 wouldn't have heard of this addition anyway.

Brown Mooshroom Cows give players an unlimited supply of suspicious stew, making these cows incredibly useful to have around. It's a bonus that these cuties don't rip the player off.

Villagers charge players a few emeralds for a single serving of the stew. But a player doesn't control the effect of the stew if obtained through trading.

This article is for the cow. vgh

Mooshroom Cows are cows that spawn only in the rare Mushroom Biomes. They drop 5 mushrooms when sheared, turning them back into normal cows. When milked with a bowl, Mooshroom Cows give you a bowl of mushroom stew.

Mooshroom Cows look alot like cows, but the black spaces on the cows are red, and the Mooshroom has mushrooms growing out of him. There eyes don't look the same, but their snout looks exactly the same. They have hooves, like cows. They can be bred with wheat, like cows.

Mooshroom Cows have lots of uses:

- Can be milked with a bowl to get Mushroom Stew

- Can be sheared to get Mushrooms

- Can be milked with a bucket to get milk.

- Can be killed to get leather and raw beef.

1. 'Milk' it with a few bowls to get a few mushroom stew

2. Shear it for the mushrooms

3. Milk the cow with a bucket for milk

4. Kill the cow for its leather and meat

Mooshroom Cows can be bred with wheat, like sheep and cows. To get them to breed, right-click on 2 Mooshrooms and they will 'kiss' for a few seconds, and a baby will appear.

For the mob in Minecraft Dungeons, see MCD:Mooshroom.

Not to be confused with MCE:Moobloom or Mushroom.

Mooshrooms are mushroom-covered variants of cows exclusive to the rare mushroom fields biome.

Red mooshrooms can spawn in mushroom fieldsbiomes in herds of 4–8 when the light level is 9 or higher and on Mycelium. They do not naturally spawn in any other biome. A red mooshroom transforms into a brown mooshroom (and vice versa) when it is struck by lightning. Brown mooshrooms never spawn naturally.

A pair of mooshrooms can breed after being given wheat. A mooshroom cannot be bred with a cow unless the mooshroom has been sheared.

Feeding wheat to a calf shortens its growing time by 10% of the remaining time.

Baby mooshrooms do not have mushrooms on their backs. Mushrooms appear once the baby grows to an adult.

Breeding two red mooshrooms has a 1⁄1024 chance to spawn a brown baby variant and vice versa.

When an adult mooshroom is killed, it drops:

Upon successful breeding, 1–7 is dropped.

Shearing a mooshroom drops 5 corresponding mushrooms and turns the mooshroom into a normal cow, emitting a smaller version of the explosion particle. The mushrooms don't grow back.

Like other baby animals, killing a baby mooshroom yields no items or experience.

A mooshroom can be milked by using a bucket on it, yielding a milk bucket. The player can then use the milk bucket to consume the milk, which removes any status effects from the player.

Mooshrooms can also be milked with bowls to give mushroom stew.

Mooshrooms have the same AI behavior as cows: they tend to walk around slowly and aimlessly, huffing and mooing occasionally. They avoid danger such as cliffs, fire or lava, but make no attempt to stay out of water.

Mooshrooms have entity data associated with them that contain various properties.

This page would benefit from the addition of more images.

Please remove this notice once you've added suitable images to the article.
The specific instructions are: Did the mushrooms previously have shading before 1.8?

Minecraft Mobs Explored: Mooshroom, A Cow That Features Mushrooms On It’s Back But Still Has Milk To Give

Hostile mobs will immediately begin to attack both various mobs and the player; these mobs are primarily stuck to a certain biome or only spawn in the night/shade. One example of a hostile mob is the Blaze, which is confined to the Nether, a totally separate dimension.

Neutral mobs neither attack nor help the player; these mobs primarily want to be left alone and don’t require any input or action. These mobs are like the Minecraft Bat, which doesn’t even drop any EXP orbs or items for the players.

Passive mobs which can be tamed and help the player with ease. These mobs, like the Minecraft Wolf, when tamed, can follow around the player and help attack mobs, which can keep the player safe from Zombies, Skeletons, and other Hostile Mobs.

Many overlook a Neutral mob is the Mooshroom, which has an appearance similar to the standard Minecraft cows; the main difference is the color scheme. The Mooshroom has an overall red coloring and even has mushrooms growing on its back. 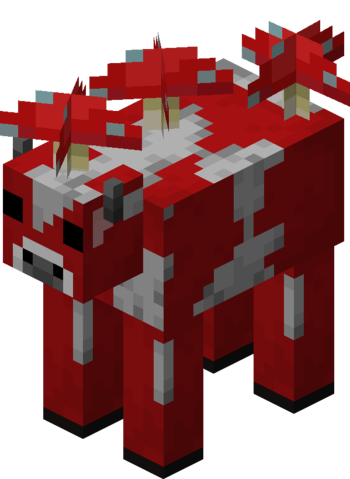 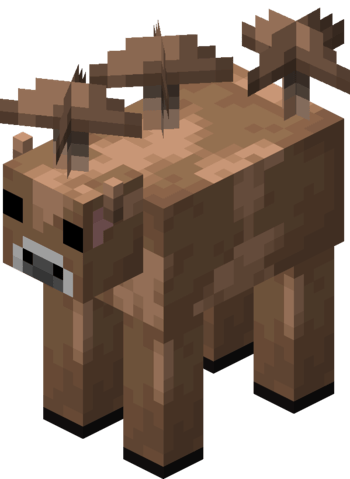 The Mooshroom can feature both mushrooms; players with both the red and brown Mooshrooms can easily create mushroom stew whenever needed.

When the player shears a Mooshroom, it will drop five mushrooms of whichever color scheme the mob currently has, then the Mooshroom will transform into a regular Minecraft cow.

An interesting fact is when sheared, there is a small chance that the Mooshroom will split into two cows rather than creating just a single cow.

A Mooshroom features a total of ten health points, or a total of five hearts, and can drop anything from Raw Beef, Mushrooms, Leather, Milk, Mushroom Stew, or even Suspicious Stew. These various drops make breeding and farming Mooshrooms a perfect choice for any Minecraft.

Mooshroom is a unique type of cow only found in the mushroom biome (aka Mushroom island). You can see mushrooms growing on its back, it is red with white/gray spots and full-black eyes. If right-clicked with shears, the mooshroom will drop some mushrooms and become a normal cow (cannot be turned back into a mooshroom). If right-clicked with a wooden bowl, the bowl will get filled with mushroom stew. If a mooshroom gets killed, there is a chance for it to drop leather, raw beef, and/or mushrooms. Baby mooshrooms look just like the adults exept they do not have mushrooms in their back.

Mooshrooms are bred the exact same way cows, goats and sheep are bred. Feed them Wheat. In order to get a baby mooshroom to grow, feed them more wheat.

In This Wiki Guide

Mooshrooms are available in the following versions of Minecraft:

* The version that it was added or removed, if applicable.
NOTE: Pocket Edition (PE), Xbox One, PS4, Nintendo Switch, and Windows 10 Edition are now called Bedrock Edition. We will continue to show them individually for version history.

The following is a picture of what a mooshroom or mushroom cow looks like in Minecraft: 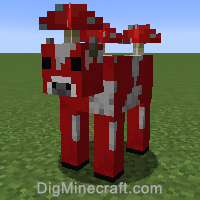 In Minecraft, a mooshroom has 5 hearts

Where to Find Mooshrooms

In Minecraft, mooshrooms can be found in the Mushroom Island biome.

If you are having trouble finding a mooshroom, you can summon a mooshroom using a cheat or you can use a spawn egg.

A mooshroom does not carry a weapon.

When you kill a mooshroom in Minecraft, it will may drop one or more of the following items: raw beef or leather.

Make sure you pick up the dropped items before they disappear. These are useful and should be kept in your inventory to be used later.

TIP: If you kill the mooshroom with fire, it may drop steak.

As you play the game, you will gain experience. The most common way to gain experience is by killing mobs. When a mob is killed you will see tiny green and yellow balls appear and move towards you.

You can spawn a mooshroom using the following spawn egg:

Things to Do with Mooshrooms

Here are some activities that you can do with mooshrooms in Minecraft:

Here are some game command examples for a mooshroom in Minecraft:

Here are the NBT tags (formerly called data tags) that you can use in game commands for a mooshroom in Java Edition:

Here are the spawn events that you can use in game commands for a mooshroom in Bedrock Edition and Education Edition:

Here are some of the other mobs in Minecraft:

She gave herself to a complete stranger right in her dressing room, seeing him for the first time in her life. And most importantly, I didnt regret it. She even wanted more, longer, hotter, more satisfying. Nana is already an adult woman, so she can understand herself and her body and accept her desires, and not seek excuses for them.

How to use healing numbers