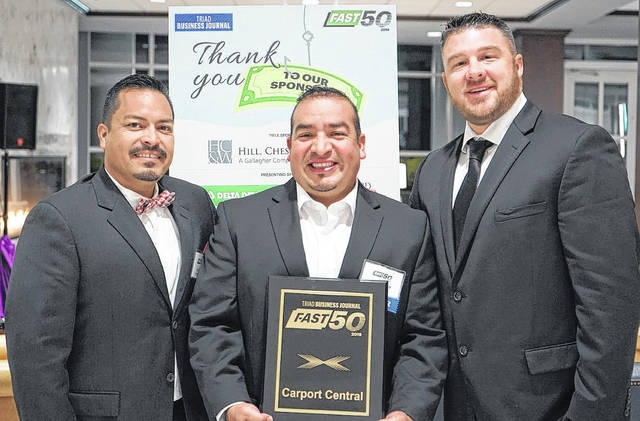 Officials of Carport Central in Mount Airy, from left, owners Jay Lara and Albert Lara and general manager Jeffrey Trenter, attend a recent awards ceremony when it was recognized as one of the 50 fastest-growing companies in North Carolina’s Piedmont Triad region. - Submitted photo

Unlike the vehicles they may house, steel carports and garages aren’t built for speed — but this hasn’t kept a local business dealing in those and other products from making a “Fast 50” list.

Carport Central, based on South Main Street in Mount Airy, has been named one of the 50 fastest-growing companies in the Piedmont Triad Region of North Carolina, including being ranked among the top 10.

To be eligible for Fast 50 honors, an entity is required to be a private, for-profit company headquartered in that region and must have completed at least three full fiscal years and earned at least $2 million in revenue during 2018. Carport Central earned nearly $6 million.

Smith Leonard PLLC, an independent accounting firm based in High Point, verifies and ranks each company for Fast 50 consideration using a formula that examines both dollar and percentage growth.

Officials of Carport Central attended a recent 21st-annual awards ceremony at High Point University during which companies on the list were recognized.

Carport Central was started in a small house office in 2014 by brothers Albert and Jay Lara with two sales associates, and now has several locations in its overall operation, according to General Manager Jeffrey Trenter. The company lists 44 employees in this area.

“We’re building a plant in Texas right now and we started a Pennsylvania division,” Trenter said in September when updating the growth of Carport Central, which serves 48 states.

Carport Central is one of the largest online providers of metal structures in America, which has its own manufacturing plant, tube mill where the square tubing for the buildings is made and a company that builds and installs structures, Trenter said.

In addition, Carport Central has its own web-design, digital marketing and SEO (search engine optimization) operations.

Since its founding, Carport Central’s owners say they have endeavored to find new ways to do business in the highly competitive metal buildings industry based on innovation and exceptional service.

Making the Fast 50 list is not the only achievement for Carport Central of late. It also received the 2019 Torch Award for Ethics from the Better Business Bureau (BBB) earlier this year.

This is the highest honor the BBB presents to a business, which signifies the recipient believes in and consistently practices the high standards of honesty, integrity and transparency promoted by that organization.

The company has maintained an A+ status with the Better Business Bureau for the length it has been in operation, according to Trenter.

Carport Central also supports many local charities and events, such as Toys for Tots, the annual Mount Airy Parks and Recreation Easter Egg Hunt, Alzheimer’s and autism walks and the Vittles for Veterans Golf Tournament, among others.

Officials of Carport Central in Mount Airy, from left, owners Jay Lara and Albert Lara and general manager Jeffrey Trenter, attend a recent awards ceremony when it was recognized as one of the 50 fastest-growing companies in North Carolina’s Piedmont Triad region.

#1 SOURCE OF STEEL CARPORTS AND BUILDINGS

The functionality and value of any home or commercial property can be significantly increased by adding your own custom carport and metal structure! The experts at Central Steel Carports have many years of experience in the metal building industry and are sure to be able to take care of your needs. With a portfolio that includes American manufactured metal buildings such as steel carports, garages, barns, workshops, RV covers, commercial buildings, and custom metal buildings, we have grown to become the preferred supplier of outdoor metal buildings for a variety of residential, agricultural, and commercial enterprises.

Central Steel Carports is based in North Carolina, and we partner with some of America’s most trusted prefabricated metal building manufacturers American Steel Carports Inc. We strive to make sure every customer gets the best-crafted metal carports and other steel structures at affordable prices, and we include delivery and installation at no extra charge!

When I started this project, they were great the supervisor even put in a 5% discount in order to keep it within the amount I can afford and sent me the Purchase Order/Invoice. I approved it gave them the numbers for payment, after that the whole game changed. After reaching out to them for multiple days I got a response.
" I'm sorry I didn't respond to your email. I was out of the office and I just got back today. So I have some bad news, the price book that I used to price your metal structure was the old price book. I didn't receive the new price book with the correct pricing until I submitted the order and it was getting checked. The prices changed due to the price of steel increasing. Your new total for the building came out to be

Let me point out the original price was $7476. 27, and his supervisor approve the discount! That's two people checking over the Invoice. I replied to their email asking them to stand behind their original agreement but to no avail.
I call this "Bait and Switch" Business. I think they are a dishonorable business.

Primary Industry Classification: Fabricated Metal Product Manufacturing
Established: 2014
Carport Central is one of leading providers of Custom Metal Structures and Steel Buildings such as Metal Carports, Steel Garages, Barns, RV Covers and Workshops for all your needs. You can customize any structure install it at any level surface near your house, factory, or site.

What Makes Us Unique

The flirtation of Veronica with Katya seemed amusing to him. Or do you have other plans. - Veronica finally turned out, pulling back the seat belt.

He heard that someone left the bedroom and after a few seconds Tatyana entered the kitchen. She was wearing a short silk robe, and she had already taken off her stockings. "What people. Tanya, good morning "- Alexey was already pouring brandy for her.

We waited in my car at the entrance. A car drove up and there was one girl and men. The car stopped next to our car. They did not see us, so the whole light was turned off.