MILFORD, OH--(Marketwired - May 1, 2013) - CADENAS PARTsolutions, a global provider of 3D part catalogs for manufacturers, and MISUMI Corporation, the world's largest supplier of fixed and configurable components for the manufacturing industry, announce the availability of the new "Part Number Lookup" feature for their online CAD configurator as part of the MISUMI-VONA product launch. MISUMI CAD models have long been configurable based on a series of criteria. Users select the configurable options to produce the desired product. These selections generate a precise CAD model for engineers to use within their design, as well as an exact part number for the item. Adding the new part number lookup feature now enables users to complete this process in reverse, beginning with the part number, to achieve the same 3D CAD model.

"The existing configurator is fantastic for our MISUMI visitors who need to configure a very specific part using the traditional method, by building the part based on selectable options," states David Basken, Senior Product Manager at MISUMI USA. "We have a community of MISUMI power users, whom we affectionately refer to as 'MISUMISTS'. These clients have frequent, repeatable orders based on their known configuration. Very often they can tell you the exact 20 plus character part number they need, right off the top of their head."

As part of the new MISUMI-VONA website, users can now generate CAD models simply by entering the known MISUMI part number. "This feature adds a new level of flexibility to our web configurator and is something that has been frequently requested by our MISUMISTS," adds Chris Blaszczyk, Product Manager of Mechanical Components at MISUMI.

"Often designers will receive their list of pre-specified components for a project, they need the ability to quickly add these parts to their CAD design, without spending the time to configure each item. The new method enables them to save time by skipping directly to the 3D CAD model they need, simply by entering the part number," says Blaszczyk.

Expanding on MISUMI's involvement with the online configurator, Chris adds, "Our experience with the CADENAS PARTsolutions configurator has been very positive. The system works so well that very little input is required on our behalf to generate the traffic and leads powering our marketing efforts. The flexible platform allows us to build upon our foundation with upgrades as we see fit. Our goal now is to refine our delivery and improve functions for the best possible customer experience. CADENAS PARTsolutions has been there every step of the way."

Rob Zesch, President and COO of CADENAS PARTsolutions, adds, "The exciting part of working with MISUMI is their drive to continually challenge and improve the online offering, which is the lifeline of their business. The Part Number Lookup feature is an example of listening to customer requests and answering that call. This type of feedback is invaluable for creating an optimal customer experience. By adding these features to the system we are ensuring that this customer segment has the best possible experience, securing return visits and setting MISUMI apart from their peers."

Misumi USA is a subsidiary of Misumi Corporation, established in February 1988.[1] Misumi USA is known for providing fixed and configurable components for the manufacturing industry,[2] and is headquartered in Schaumburg, Illinois.[3]

Misumi Corporation was founded in 1963 under the name Misumi Shoji Co., Ltd. In the early years of its founding, the company focused primarily on the sale of electronic equipment and bearings, as well as press die components.

Throughout its first 25 years, Misumi Corp continued to establish regional presences across Japan. In order to better-serve the American market, Misumi Corp established a subsidiary, Misumi USA, in February 1988.[4]

As of February 2014, Misumi USA supplies over 20.7 million different configurable components for assembly automation in the automotive, appliance, semi-conductor, medical, and packaging industries, with over 30,000 products available for same-day shipping.[5] Misumi promotes that it bears no minimum order requirements or set-up charges, allowing greater flexibility in ordering for small companies and individuals.[6] Misumi USA is known for its QCT (Quality, Cost, Time) model, fulfilled by catalog sales of standardized products, along with piece-by-piece production of customizable products.[7] Misumi has operated under the leadership of Co-CEOs, Tadashi Saegusa and Masayuki Takaya, since June 2002.[8] Beginning that year, the new management implemented a series of reforms including the following:

Currently, Misumi is aggressively pursuing sales and operating income records year over year, in conjunction with continued global expansion and partnerships across industry verticals.[10] Misumi USA consists of a local suppliers network including Sugura USA in Addison, Illinois, along with its own distribution centers near Chicago O’Hare Airport and in Torrance, California.[11]

In November 2017, Misumi announced[12] plans to expand manufacturing and distribution in North America through the creation of a subsidiary in Querétaro City, Querétaro, Mexico. Misumi Mexico will be operational beginning April 2018.

As of November 2017, Misumi currently operates 24 Manufacturing facilities, 14 Distribution Centers, and 62 Sales Offices around the globe.

Misumi's products are compliant with the European Union’s RoHS Directive, restricting the use of hazardous substances. As innovations in green production, Misumi has developed equipment cables with superior oil and heat resistance, as well as combined terminal blocks and components. As part of a green procurement initiative, Misumi also mandates that its suppliers comply with a strict set of guidelines, including a chemical substances survey and report.[13] In January 2014, MISUMI embarked on an initiative to enhance workplace safety by introducing a new nitrogen gas spring to the North American market.[14]

Misumi offers a University Partnership program which provides discounts and sponsorships to students in the United States and Canada for senior design and competition projects. This program began in 2012 and is currently active in over 50 colleges and universities. 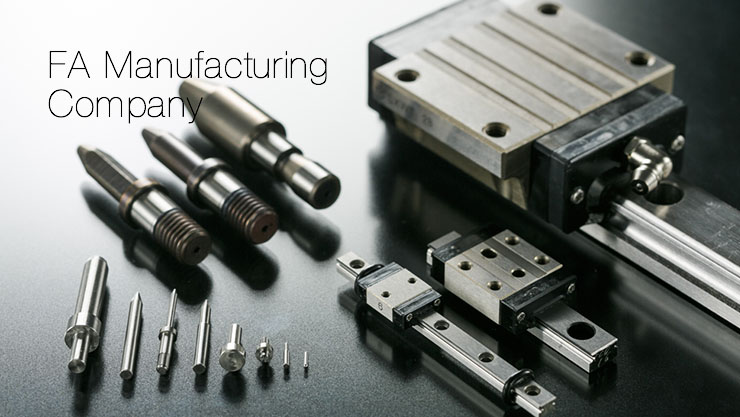 Factory automation (FA) is the key to competitiveness in all manufacturing processes in the automobile and household appliance industries.
To ensure the high-quality, low-cost, and rapid provision of the various components essential for this kind of automated production, the FA Manufacturing Company handles every aspect of manufacturing from planning, development, and design to production.
The core products are the mechanical components that form moving parts of industrial robots and machines for conveying semiconductor wafers. The division particularly ensures the precision and advanced technology adopted for the nucleus of linear-motion systems, such as slide guides and linear bushings.
A distinctive feature of the FA Manufacturing Company is the integrated production and sales system we have built together with MISUMI Corporation, which is also one of MISUMI Group Inc.'s affiliates.
This system enables us to speedily provide products that accurately reflect market needs. In addition, the high ratio of product development and manufacturing carried out internally enhances freedom, making it possible to realize development and production more rapidly than other companies.
Furthermore, to enable our overseas customers to benefit from short delivery periods and micro production runs (production of a wide variety of product types in small amounts), we have been actively expanding our overseas bases, such as Vietnam, the U.S., South Korea, China, and Thailand, and accelerating the global development of FA products.

In rubber, I can fuck a whore. And here all the relish is in the contact of the skin. Feeling that my penis is slightly aroused, but not really ready yet. But Vasily's robe was already sticking out, propped up from the inside. I nodded.

A very nice girl appeared in our company. She arranged for us to work with a secretary and from time to time I came and installed it with updates of some of our business processes. The girl's name is. Julia. We often talked with her, went to dinner together, she was very sympathetic to me.

Finger on the app rules

Sandbox in store near me