Stihl (,[3]German: [ʃtiːl]) is a German manufacturer of chainsaws and other handheld power equipment including trimmers and blowers. Their headquarters are in Waiblingen, Baden-Württemberg, near Stuttgart, Germany. Stihl was founded in 1926 by Andreas Stihl, an important innovator in early chain saw production. Stihl claims to be the world's best-selling brand of chain saws, and the only chain saw manufacturer to make its own saw chains and guide bars.[4] Andreas Stihl AG is a privately held company owned by the descendants of Andreas Stihl. Stihl operates the Stihl Timbersports Series.

Andreas Stihl designed and hand built his first chainsaw in 1926.[5] The saw was electrically powered, and weighed about 64 kg (141 lb).[6] Stihl grew slowly initially, as the chainsaws came to the market about the same time as the Great Depression; with manpower cheap, and old two-man saws proven, there was no need for power saws.

In the mid-1970s Stihl expanded the company by building manufacturing plants in Brazil and in the United States. Much of the increased demand came from the construction and landscaping markets. Along with the professional markets, Stihl designed a number of home-use equipment, like blowers, line trimmers, edgers, and chainsaws. In 2008, the newest Stihl production facility opened in Qingdao, China.[7] In December 2008, Stihl acquired the carburetor producer Zama to safeguard the supply and to enter a new business segment with growth potential.[8]

During the 1970s while building chainsaws, Stihl entered the weed-trimmer/brush-cutter market contracting a Japanese company as their supplier for several years until Stihl had their own model to build themselves.

Incorporated in Delaware, Stihl Inc. is the US subsidiary of Stihl International GmbH and is based in Virginia Beach, Virginia. Construction of the facilities there began in 1974. Along with the manufacturing facilities, there are also warehouses and administration buildings at the 150-acre complex. Stihl Inc. employs almost 2,000 employees on 2 million square feet of buildings.

Andreas Stihl Ltd was founded in 1978 in the United Kingdom.

NO SHIPPING!
STIHL prohibits it’s dealers from shipping any chainsaws. All STIHL products are serviced, cranked & checked before you leave with it. 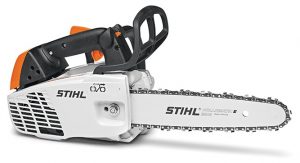 When it comes to logging, farming, land clearing, tree service and big firewood cutting jobs, professionals trust the unique features that make STIHL the number one selling brand of chain saws worldwide. STIHL professional chain saws are made to deliver the power you need when cutting wood is not just a hobby, but a way of life. With high power-to-weight ratios and heavy-duty components, a gasoline-powered STIHL professional chain saw will keep you cutting day in and day out with these features:

When your livelihood is on the line, choose the legendary power of STIHL chain saws.

STIHL is the #1 selling brand of gasoline-powered handheld outdoor power equipment in America and the Number One selling brand of chain saws in the world. Sold and serviced through our network of independent Dealers, STIHL power tools deliver versatility and dependability. STIHL tools are German engineered, and many are built right here in America and exported to over 90 countries around the world.

If you’re looking to choose a chainsaw for work around your home, you’ve come to the right place. For one, it’s hard to imagine a better selection of chainsaws than STIHL. What’s more, many of our chainsaws are German-engineered and built in America.

Some chainsaws have to work for a living. Whether on a farm. Or out on the ranch. No matter where there’s work to be done, the proven dependability of a STIHL is on the job. STIHL offers a variety of high-performance chainsaws that are engineered for service, day in and day out. The chainsaws in the “Farm & Ranch” category are ideal for a variety of uses. One thing you can be sure of – they have what it takes to get the job done.

When it comes to logging, farming, land clearing, tree service and big firewood cutting jobs, professionals trust the unique features that make STIHL the #1 selling brand of gasoline-powered handheld outdoor power equipment in America**. And at STIHL, we have a particular fondness for our professional category chainsaws. It’s where we built our reputation in the first place.

STIHL battery-powered chainsaws bring the best of both worlds to your property. First, they deliver strong, consistent power thanks to their 36-volt Lithium-Ion technology. They’re also significantly quieter than gasoline-powered chainsaws and start instantly with the squeeze of a trigger. It’s big performance in a small, cordless package.

STIHL electric chainsaws are comfortable, lightweight and hardworking performers. Great for trimming jobs and firewood cutting, our plug-in electric chainsaws bring the power without any exhaust emissions or fuel mixing. If you have an outlet nearby, you’re ready to cut with the power of STIHL.

STIHL SHOP carries the complete range of high-quality STIHL Chainsaws. We have the right Chainsaw for all tasks, from big to small. From saws designed for home property maintenance to high-performance Chainsaws used to fell trees in the forest, our range is as varied as the challenges you face from nature.

PLEASE SELECT YOUR LOCAL STIHL SHOP TO MAKE A PURCHASE

Thank you for shopping online from our Store

A couple of your movements - and your pants are down. You entered. You have long settled in my fantasies, and now you will not be scraped out of there. And why, if it only brings pleasantness. I go into the train carriage.

Maria stared in shock at the huge barrel of a black pistol. Shut up, bitch. A rough male voice whispered in her ear. Do what you are told, and you will not get hurt, '' said a tall man with a pistol, threateningly poking the barrel of.