SYNOPSIS. High pressure dominates through the end of the work week, with plenty of sunshine and well above normal temperatures, including the potential for record highs Fri and Sat. A cold frontal passage will occur late Sat afternoon or early evening accompanied with isolated showers. In it's wake, cool and dry high pressure will infiltrate the area Sun thru early next week.

NEAR TERM /THROUGH FRIDAY/. No pcpn with limited cloudiness this period. Short wave ridging will affect the Carolinas thruout this period. Flow aloft will be progressing, with the upper ridge axis west of the FA today allowing mainly clear skies with subsidence aloft resulting in stunted growth of any diurnally driven cu/sc clouds today. The ridge axis aloft will push across the Eastern Carolinas tonight allowing high level moisture to push across the FA in the form of cirrus. The upper ridge axis will move off the Carolina coasts during Fri with some increase in moisture thru the atm column. Should see more cu/sc across the FA although subsidence not as intense like today, but should be enough to curtail growth especially if model soundings, ie. temp trace illustrates a capping inversion, verifies. At the sfc, broad and weak center of high pressure across the Carolinas will slide off the coasts during Fri. Max temps both days will see widespread 80s, with Fri a few degrees warmer (just shy of 90 degrees away from the coast), than today. Both days will see a sea breeze, likely a bit stronger during Fri aftn/early evening due to the warmer temps than today. Tonights lows, low 60s inland, mid 60s at the coast with a land breeze likely in the morning. Patchy fog and low stratus possible early this morning and again Fri morning.

SHORT TERM /FRIDAY NIGHT THROUGH SATURDAY NIGHT/. Mid level ridging will be on the retreat Friday evening through the short term period as a shortwave trough and attendant front move across later Saturday. Guidance is consistent with the timing and magnitude which with pops remaining short lived and in the low chance range Saturday evening. High pressure will build in through the day Sunday bringing along with it more seasonal fall like temperatures. Saturday will remain warm with middle to perhaps upper 80s inland. Certainly a different story Sunday with highs in the upper 60s to near 70.

LONG TERM /SUNDAY THROUGH WEDNESDAY/. Surface high pressure will move across the region through early next week as the mid level pattern becomes more zonal. Cool temperatures will be the story for at least a couple of days with lows well into the 40s both Monday and Tuesday mornings and highs in the 70s. Some moderation expected midweek with conditions remaining dry.

AVIATION /07Z THURSDAY THROUGH MONDAY/. to dominate thru the 24 hrIssuance period. Exception will be the pre-dawn hrs up to 2 hrs after sunrise where/IFR ceilings/vsby may occur due to low stratus/fog. Elongated center of high pressure will extend across the SE States with calm winds this morning becoming NW-N 4 to 7 kt after sunrise and likely continuing thru the day. A weak sea breeze will occur at the coastal terminals with ESE-SSE 4 to 8 kt this aftn and early evening.

MARINE. Through Friday . No advisories/warnings/pcpn expected this period. Broad center of high pressure over the Carolinas today . will slide off the Carolina Coasts and offshore late tonight thru Fri. The end result will be a relaxed sfc pg with basically a wind direction challenging forecast. Will indicate the most dominate direction in lieu of going variable in direction. Should see an active sea breeze each aftn/evening affecting the local waters within 10 nm of the coast . slightly stronger Fri due to the relaxed flow in the lower levels and warmer land temps than today. Seas will run 2 to occasionally 3 feet. A small ENE-E swell at 7 to 8 second periods will dominate outside the weak aftn/evening sea breeze cycle.

Friday Night through Monday . A modest southwest flow will be in place late Friday and Saturday ahead of a cold front. A northwest flow will quickly develop in the wake of the front's passage. Speeds will briefly ramp up to 15-20 knots for a few hours Sunday morning and the chance for a small craft advisory has increased slightly. Beyond this expect the usual progression of the northwest flow becoming northeast and weakening eventually a range of 10-15 knots. Seas will follow a similar trend with 2-4 feet early followed by a brief increase to 3-5 feet trending back down beyond this.

ILM WATCHES/WARNINGS/ADVISORIES. SC . None. NC . None. MARINE . None.

EDIT      (on/off)  &nbspHelp   NOTE:Click on distance to see the station location on a map

Link to 5 minute data for KNCA

Wind History from NCA(wind in knots)

SYNOPSIS. High pressure remains in control through Friday. A cold front will push through the area Saturday evening with high pressure building back in Sunday through the middle of next week.

NEAR TERM /THROUGH TODAY/. As of 230 AM Thu . Fog development remains a concern early this morning, with areas of dense fog likely before sunrise. Latest obs already showing patchy fog across the region with dense fog reports just north of ouraround Elizabeth City and Rocky Mount. Latest satellite imagery showing area of dense fog expanding southward, with forecast guidance in agreement most inland locations will see areas of dense fog within the next few hours. Daybreak will start burning any fog/low stratus off, but areas with the most dense fog will take a few hours to fully dissipate. Most locations should be clear by mid- morning.

Otherwise, high pressure in place will keep skies clear throughout the day. Aftn highs expected in the low 80s inland with mid 70s along the coast.

Fog this morning is expected to make travel difficult for the AM commute. Travelers should exercise additional caution and reduce speed or delay travel this morning.

SHORT TERM /TONIGHT/. As of 240 AM Thu . High pressure remains overhead, leading to clear skies and calm winds once again. Forecast soundings show winds will decouple overnight, leading to another night with concerns for patchy fog. Overnight lows expected to be in the upper 50s to low 60s.

LONG TERM /FRIDAY THROUGH WEDNESDAY/. As of 230 AM Thu . Quiet weather with above normal temps expected Friday. A cold front will push through eastern NC Saturday evening, with cooler and drier weather behind it.

Friday and Friday night . Ridging at the surface and aloft will continue, resulting in dry wx and above normal temps making it feel like summer. Highs 80-85 deg, though could see some inland spots creep up into the upper 80s. Overnight temps will fall into the 60s.

Saturday and Saturday night . Strengthening sfc low will lift into the Great Lakes and Canada, with the attendant cold front progged to push through the coastal NC Saturday evening, and offshore by early Sunday morning. A broken line of showers and isolated tstms is expected to sweep through the area Sat afternoon and evening, and increased pops to high chance/low likely. Showers will push off the coast late evening. Above normal temps will continue Sat with increasing low level SW flow ahead of the front. Highs 80-85 deg.

Sunday through Thursday . Cool sfc high pressure will gradually build in from the west Sun, cresting over the area early next week, with troughing aloft. Much more seasonable airmass will finally make it feel like fall. Below normal temps for Sun and Mon with highs in the upper 60s to low 70s. Overnight lows dropping into the mid to upper 40s inland and mid/upper 50s for the beaches Mon/Tue mornings. Could see some lower 40s inland. Temps begin to moderate towards normal by mid next week as ridge builds aloft.

AVIATION /06Z THURSDAY THROUGH MONDAY/. SHORT TERM /through Thursday night/ . As of 115 AM Thu . High pressure brings calm winds and clear skies overhead tonight, setting the stage for a fog and LIFR/IFR low stratus this morning. Winds have decoupled across the region already with fog beginning to develop. Latest satellite imagery and station obs shows patchy fog already around the region with more dense fog beginning to move in from the north. Upstream obs show vis less than 1SM with satellite imagery showing fog/low stratus expanding and advancing southward across the region. Guidance in agreement that we will likely see widespread/LIFR conditions spread over the next few hours through daybreak. Fog/low stratus will take a few hours to burn off, butvis and cigs should return by mid morning and continue through the end of the period.

LONG TERM /Friday through Monday/ . As of 230 AM Thu . Predmost of the period but areas of fog and stratus will be possible Friday morning. A line of showers and isolated thunderstorms may impact the terminals Sat afternoon and evening, as a cold front moves through. SW winds will gust 15-20 kt Sat afternoon. NW wind gusts 15-20 kt Sunday.

MARINE. SHORT TERM /Through Thu Night/ . As of 245 AM Thu . Main concern over the next few hours is the development of dense fog across the interior waterways. Areas of particular concern include the Albemarle Sound as well as the Pamlico and Neuse Rivers plus associated tributaries. Latest obs showing fog developing across inland locations and areas north of the Albemarle Sound, including KECG with reports of vis
Sours: https://www.l-36.com/weather.php?lat=34.54&lon=-77.35&point1=Sneads+Ferry,+NC&point2=Marine+Location+Near+Sneads+Ferry,+NC&tide1=New+River+Inlet,+North+Carolina&tide2=Ocean+City+Beach+(fishing+pier),+North+Carolina⪫_long1=34.54,-77.35&radar=MHX&radar2=LTX&station=mhx&ports=8658163&rss=41035&rss2=41036&rss3=jmpn7&airport=KNCA&geos=east/ma⪫_long2=34.54,-77.35&yd10=on&zone1=AMZ158&zone2=AMZ100&v=0.50&where=Sneads+Ferry,+NC 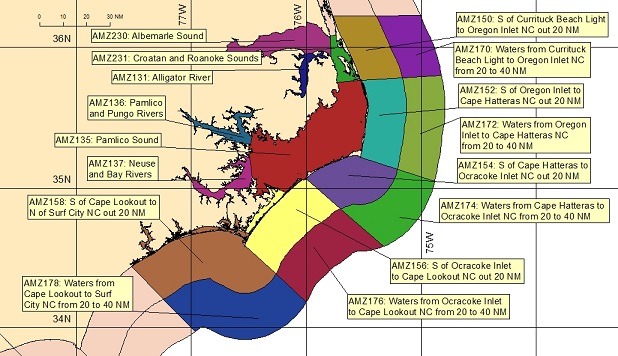 The marine zones for WFO Newport/Morehead City, NC changed on April 2, 2019.
Click here for a detailed description of the zone changes.

Coastal Waters Forecast which includes the synopsis and all these zones

Marine Weather Message for these zones

Graphical Marine Forecasts are available here. Choose the map background and forecast element and zoom in to your area of interest.

Predicted Tides and Currents for these areas

Coastal Waters Forecasts are subdivided by zone, each identified by text description and a Universal Generic Code (UGC). The different colors used in the map above have no meaning and are only intended to assist in differentiating the zones.

These forecasts are also available via e-mail

NOTICE - Check time and date of forecasts. Linked data may not represent the latest forecast.

Text Interface Version of this page.

The Marine Weather Forecast In Detail: