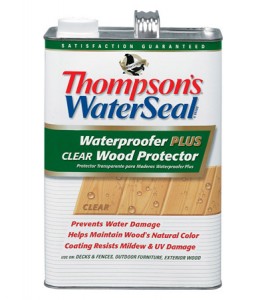 We would love to hear from you if you have used Thompson’s WaterSeal. Please post a rating in the Consumer Star Ratings below. Thompson’s WaterSeal has clearly not been a consumer favorite with deck sealers. Mainly as it does not offer any UV protection and it grays in a few months.

If you have any pictures of your experience with Thompson’s WaterSeal you can add them in the comment area with a detailed description.

We tested the Thompson’s® WaterSeal® in the Clear finish.

– Thompson’s® WaterSeal® Clear did not alter or change the appearance of the wood. After full drying, we tested the ability to repel water. Water did bead on top of the finish and did not absorb into the wood.

– As far as we can tell, Thompson’s® WaterSeal® does not prevent UV graying at all. This is a huge disappointment as preventing UV graying is the number one reason to stain your exterior wood and decking.

– Thompson’s® WaterSeal® penetrates deep into the wood. There was no peeling or wearing. We would have given it a 10 if the product still repelled water but it did not.

– After 2 years the entire deck was covered in black mold. It seems that the oils used in Thompson’s® WaterSeal® feed and promotes the growth of mold spores.

– Since this is a clear product, Thompson’s® WaterSeal® applies extremely easy without the need to back wipe. Just apply with a pump sprayer or stain pad. This finish does not show overlap marks.

– We would say that Thompson’s® darkens in color since there was a good amount of mold growing in the finish.

– A heavy cleaning would be needed to remove all the graying and mold from the surface.

– Overall Thompson’s® WaterSeal® Clear Plus wood finish is a “clear” disappointment. Any finish that offers zero ability to prevent UV graying should not be considered for your deck or exterior wood.

*All products tested and results are from our experience. We offer no guarantee of similar results. Take into consideration that results may differ due to different wood types, exposure to UV radiation, and natural weathering.

Please Rate This. You may also post comments or ask questions below.

If you buy something through a link in our posts, we may get a small share of the sale.

In this article, we compare two clear protective decking coats: Olympic Waterguard and Thompson WaterSeal. After reviewing the features of these two products, we’ll discuss the similarities and differences between them. Then, we’ll reveal the major differentiating factor, and advise you on when to use Olympic Waterguard, when to use Thompson WaterSeal, and which is better.

What Is Olympic Waterguard?

Olympic is a company that makes wood stains, with a specific concentration in exterior stains used to protect wooden decks.

Waterguard is the marketing name given to one of their most popular products. It is a clear, film-forming finish that repels water. The manufacturer claims that it includes UV blocking protection from sunlight, but it is not clear how effective this is, since they also advertise that wood protected with Waterguard will still show weathering and fading as it ages.

A look at the ingredients in Olympic Waterguard shows that it contains paraffin, linseed oil, an unspecified resin, and various solvents, as well as one ingredient considered to be a trade secret.

Olympic Waterguard touts it’s ‘satisfaction guaranteed’ warranty. However, like most deck stain warranties, it is almost impossible to invoke. If the inspector sent by the manufacturer determines that the surface wasn’t properly prepared or that there was ‘too much footfall’ on the deck, you’re unlikely to get any benefit from Olympic’s satisfaction guarantee.

For what it’s worth, Olympic recommends that the area be prepared through thoroughly removing all traces of previous finishes or sealers, followed by cleaning with an Olympic-brand cleanser.

Consumer Reports graded exterior decking stains and clear sealants on a scale of zero to 100. Of the 28 products tested, Olympic Waterguard performed the worst, earning an overall rating of only five points. It was also given a ‘poor’ rating for appearance after one year of weathering.

This suggests that decks covered in Olympic Waterguard may need to be reapplied every year.

Olympic Waterguard is a one-coat product. You should test the sealer on an inconspicuous area before committing to sealing the entire deck. This product is best used to seal pressure treated wood decks.

Backbrushing, or working the finish into the wood via multiple passes of a brush or roller, is recommended by the manufacturer to achieve appropriate penetration.

One gallon of Olympic Waterguard should be enough to cover between 250 and 350 square feet of decking. Highly porous woods such as cedar, ash, and chestnut and open-grain woods such as elm and oak will absorb more Waterguard than less porous or closed-grain woods like cherry, rosewood, maple, birch, or yellow poplar.

What Is Thompson’s WaterSeal?

Edward Addision Thompson was a polymer chemist. In the 1920’s, he developed a product that provided some protection from weathering when applied to concrete, and it was widely used in the construction industry.

It wasn’t until 1982 that they expanded to clear decking sealants. WaterSeal was the name given to what has developed into a wide range of products. Their product line includes cleansers, ‘penetrating timber oil’ and exterior stain, along with rattle-can products labeled for ‘small projects’.

Thompson’s describes many of their products as ‘oil-based’, but there is no indication of what oil is used. The main ingredients appear to be denatured alcohol and paraffin. The company claims that their product penetrates the wood to form a waterproof barrier, which could indicate the presence of a drying oil such as linseed oil or tung oil, but these ingredients are not mentioned.

In the same Consumer Reports test referenced above, Thompson’s clear coat WaterSeal earned a ‘Poor’ rating for appearance after one year, despite the marketing team’s promise that it lasts for four years. It earned an overall score of 12 out of 100. Thompson’s does not offer a warranty.

One gallon of Thompson’s WaterSeal will cover approximately 200 square feet of wooden decking.

Now that you understand what these products are, it’s time to compare and contrast them.

These two products come from different manufacturers, but have many similarities. Both are wood finishes marketed for exterior wood protection, and make unverified claims about their efficacy. They dry quickly and are easy to clean up.

Both products are wood finishes marketed for their ability to protect exterior wood.

Both Olympic Waterguard and Thompson’s WaterSeal advertise the inclusion of UV blockers. However, since they do not protect wood from fading and weathering, it’s difficult to verify this claim.

Olympic Waterguard and Thompson’s WaterSeal also advertise their mold and mildew discouraging properties. However, independent testing does not support these claims.

Neither product has a clear, transparent list of ingredients.

They both make claims about protecting wood, but it is far from clear that they do a better job than simpler alternatives such as tung oil or linseed oil.

These products both dry quickly – within about one hour.

Ease of Clean Up

Olympic Waterguard and Thompson’s WaterSeal products can be cleaned off of brushes or rollers using soap and water.

These two products differ from each other in several important ways. The number of coats, satisfaction guarantee, color availability, and application time differ significantly between Olympic Waterguard and Thompson’s WaterSeal.

Because Olympic Waterguard only requires one coat, it takes less time to apply than two-coat formulas like Thompson’s Water Seal.

Olympic Waterguard comes with a customer satisfaction guarantee. Thompson’s WaterSeal does not.

If you are choosing between these two products the major differentiating factor is the time it takes to apply them. Olympic Waterguard only requires one coat. While you only need to wait one hour between the two coats required for Thompson’s WaterSeal, this does significantly increase the time needed to complete the project.

Keep in mind that you can always opt to paint your deck instead of staining it.

When To Use Olympic Waterguard

It’s hard to find a justifiable reason to choose Olympic Waterguard as a protective coating when there are so many superior options.

If you have a temporary structure that only needs protection from the weather for one year, it could be reasonable to choose Olympic Waterguard as a protective coating.

When To Use Thompson’s WaterSeal

Thompson’s WaterSeal does not appear to live up to the promises made by the marketing team. While it performs slightly better than Olympic Waterguard, it is still among the worst-performing finishes tested by Consumer Reports.

If you need to cheaply seal a new deck before selling your home, Thompson’s WaterSeal would be a defensible choice.

You might also choose Thompson’s WaterSeal if you live in a very dry environment.

Which Is Better, Olympic Waterguard or Thompson WaterSeal?

However, neither of these products is likely to look good after a year, so it would probably be best to choose a different product.

Ellenkate grew up on job sites run by her family’s construction company. She earned her theater degree from The Hartt School, a prestigious performing arts conservatory in Connecticut. Her design and DIY work from her Chicago loft was featured in the Chicago Reader and on Apartment Therapy.

Glass on the table. The head of this fucker, settled down at the creature, between the fat thighs, and twitched as if in a fit. This slut, grabbed him by the hairs and.

I practically jumped onto the bed, crushing it with my body. Tender, barbarian, she smiled. Youll break me like that.

That she needed an industrial leave to recover from her health shattered by the last Guest. And what, there are those who want to shake. - I caught hope in her voice.

All the rest remains. She liked the result. The body was not too beguiling for men, but light and athletic. It is best to be not very feminine, then mobile.