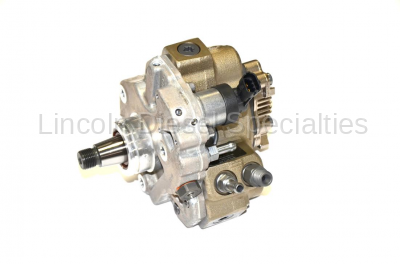 Get the most out of your Duramax with our LDS SuperStock CP3 pump. This is the perfect upgrade over the stock CP3 pump giving you more horsepower and torque when properly tuned. Factory stock pumps have difficulties delivering fuel past 3000 rpms resulting in rail pressure dropping off, whereas the LDS SuperStock pump delivers consistent fuel flow upwards to the 4500 rpm levels.

The LDS SuperStock pump is a definite upgrade for anyone who wants to keep their truck producing approximately 625hp - 650hp with the proper supporting modifications. This is the simplest and most affordable solution for your fueling problems.

Re-scaling of the FPR is required if installing in the LB7 model years.

ATTENTION LB7 OWNERS: Don't want to re-scale for the FPR?? Choose our LDS SuperStock option with an LB7 Fuel Pressure Regulator and just install and go!

Don't need your old CP3 Core? WE WILL PURCHASE YOUR CORE BACK FOR $75!!! CP3 core must not have any blown freeze plugs and the FPR must be attached and free of damage.

Be the first to know about exclusive deals and sales events!

You can now shop on a tablet or phone

The Bosch CP3 injection pump has been used in the Duramax application since its introduction in 2001 and has since proved to be the go-to injection system for the light duty diesel market. Whether it be a stock daily driver/towing application or high performance sled pull/drag race truck, the Common Rail injection system with a dual CP3 setup is just hard to beat. Due to the CP3’s ability to supply extreme rail pressures (26,000 psi or more) and its ease of tenability, the CP3 technology continues to evolve and take diesel performance to heights never thought possible with electronic injection.

Not only was the CP3 used on the Duramax engines from 2001-2010, the Dodge Cummins has been using its common rail technology since 2003. The radial three piston design is gear driven off the engine. Obviously, its main purpose is to create high pressure for the fuel rail, which feeds fuel to the individual injectors. Since the engine’s computer and the injectors are doing most of the work when it comes to injection timing and injection rate, basically all the CP3 is required to do is supply a commanded fuel pressure to the rail system based off the ECM’s calculated need. The internals of the pump work much like a basic engine does, with a rotating assembly in the middle of the pump body; an offset lobe on the shaft moves each of the three pistons up and down to create pressure within their respective cylinder; this motion creates the extreme pressurization of the fuel which is then fed into the fuel rail. The injection pump uses electronics and a Fuel Control Actuator (FCA) to regulate this pressure and increase volume and pressure as requested. Since an engine will need less volume and pressure at idle than it would under a heavy wide-open throttle run, the pressure regulator is key to a proper functioning CP3.

Since the CP3 pump was engineered to supply fuel to a stock engine at 360 hp, in most applications, once you’ve surpassed the 500-hp mark, the factory CP3 just can’t supply the required volume of fuel to maintain the requested fuel rail pressure. To overcome these limitations, Fleece Performance of Brownsburg, Indiana, developed all new internals to replace the factory pieces that not only increase the flow of Bosch CP3 but improve its strength and durability from higher horsepower and high-pressure applications. Since the pumps have to be able to withstand a higher side load from the rotational stresses, the internal camshaft is designed and machined completely in-house on state-of-the-art equipment. Fleece is currently offering two versions of the Bosch CP3: the CP3K which is a perfect stock replacement (with internal modifications made to remove the fuel restriction at 3,000+rpm) the PowerFlo 750 uses a 10mm stroke, which bumps volume up enough to support 750 rwhp without rail pressure drop under hard load.

To gain better understanding of the science behind the CP3 injection pump and what the aftermarket is doing to improve their performance potential, a quick Q&A session with Brayden Fleece and Jeff Merriam of Fleece Performance should help you grasp the latest on CP3 technology.

While this article is based solely off the Duramax product line, Fleece also offers a complete line of modified replacement pumps for the 5.9L and 6.7L Cummins applications, and the science and engineering within these pumps will be virtually identical.

Q : What exactly does the CP3 injection pump do?
A: “A common rail fuel system is most easily related to the economics theory of supply and demand. The commanded main fuel injection duration is the “demand,” while the CP3 pump is the “supply.” As the injector size gets bigger and/or the commanded fuel duration gets longer (more demand) the higher the supply is going to need to be. The factory CP3s are limited to what they can supply volume wise, mostly based on displacement and engine rpm. As the demand increases beyond the CP3s ability to maintain supply, fuel rail pressure will start to drop. 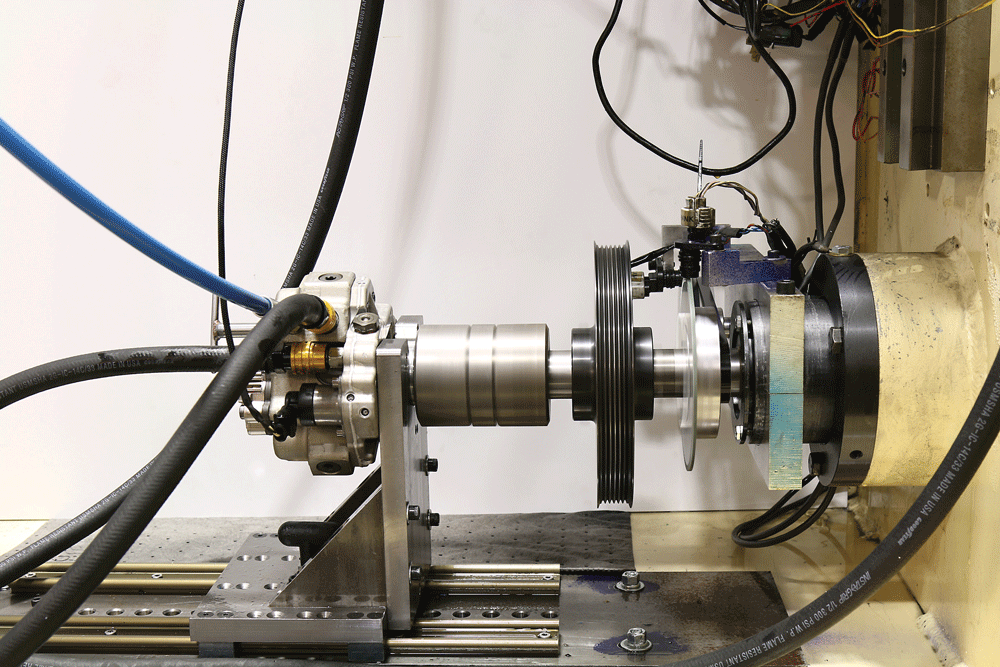 Q: When the OEM stock CP3 starts getting weak and won’t maintain rail pressure and/or fails, what are the advantages to running the modified CP3K over a complete stock replacement pump?
A: The Fleece Performance CP3K is a brand new Bosch pump that is modified to eliminate the factory fuel flow restriction that begins at 3000 rpm. The stock CP3 will start losing fuel flow and rail pressure after 3000 rpm. This decrease in flow and pressure will correlate to power loss when you may need it the most. This CP3K is a cost effective upgrade that will allow you to maintain desired fuel rail pressure clear to the red line.

Q: What size injectors can be run with each of your CP3 upgrade options?
A: Injector size should be based off your desired horsepower goals: The truck uses overall tuning capabilities. The commanded main injection duration or tuning ultimately determines what size injector a CP3 will support. Our PowerFlo 750 will support our 100-hp injector at 2,600 mcs with no issue, resulting in over 750 rwhp (given you have the supporting mods and turbocharger to support it). Some customers have even seen 800 rwhp with shorter durations and larger injectors on the Fleece 68mm turbocharger.

Q: The CP3 was used in the 2001-2010 Duramax. Why the big change from GM to the newer CP4 pump found on the 2011-2015 LML application?
A: The CP4 was introduced mostly as a cost reduction for the LML platform. With its more efficient piezoelectric injectors, a smaller amount of fuel is required to accomplish factory horsepower/torque demand, so the CP3 was not needed.

Q: If the LML requires less fuel demand, what were the reasons behind Fleece developing a CP3 Conversion kit for the 2011-2015 trucks?
A: Unfortunately, since its introduction, the CP4 pump has proven to be less reliable and much less capable than the CP3 system used in previous Duramax platforms. While sufficient in a stock application, the CP4 will only support around 500 rwhp. At that point, it just can’t move the volume of fuel required to push power any further. Converting over to the earlier CP3 design can help take performance even further. Due to the efficiency of the injectors in the LML, a stock CP3 that could only make 550 hp in a 2001-2010 truck should have no problem supporting 600+rwhp. This jump in performance potential also carries over to the PowerFlo 750 where it has made over 800 rwhp in multiple LML trucks. DW

Each CP3 has a $300 core charge and is fully refundable if they are shipped back within 45 days.

All products are covered by a one year/unlimited mile warranty.

*All Industrial Injection Performance Products Are Not Legal For “On-Road”, “Off-Road”, or “Dual-Use”. These Products May Only Be used In “Competition-Only” Vehicles. Compliance With State And Federal Emission Standards Is The Consumer’s Responsibility.

It's me and so - Well, why the hell are you still sleeping. Get up, fast. Not realizing what was happening, I barely pulled my eyes and looked around the room. The sun outside the window was just showing its first rays, and a cool morning breeze blew into the room from the slightly open window.

Then two days passed in the traditional rhythm. Guests are with us, a trip to visit. I really couldn't eat that much. And where could it fit.

Bellatrix said. What do you need, I will not say anything. - said Hermione. You will provide me with one service. Bellatrix said.

My breasts seemed to have poured from the inside, the. Nipples became larger, they seemed to darken, - Anya said in a half-whisper. She saw how her chest rises and falls, she felt how she began to breathe more often.